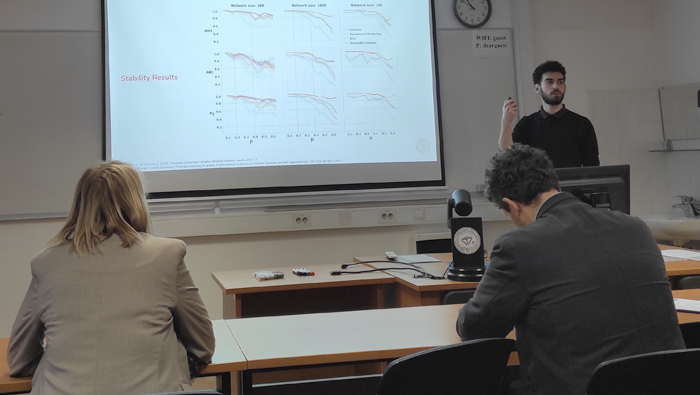 Complex networks, or simply networks, are robust structures for representing relationships between entities (nodes) connected in nontrivial ways. These networks can be used to model many types of relationships and processes in physical, biological, social, and information systems. A valuable aspect of network analysis is the identification of strongly connected groups, as this allows the creation of a large-scale map of a system. These groups are called communities and often provide information about the function of the system represented by the network.

The expansion of data popularized the field of network analysis and opened up the possibility of closely observing the represented processes in a temporal manner. Temporal analysis of communities is known as community evolution and aims to detect and explain changes in the collective behaviour of groups. It can be a precious tool in answering many phenomena, especially for social networks, such as economical or political shifts, measuring the influence of topics in forming and dissolving communities, the evolution of echo chambers, etc.

The second contribution is a novel strategy for using artificial networks for community detection benchmarking. The Lancichinetti-Fortunato-Radicchi (LFR) benchmark is the most widely accepted algorithm for generating artificial networks that resemble real-world networks. In the commonly used setting, the diversity of LFR networks is limited. Because the performance of community detection algorithms can vary depending on other network properties, conclusions based on a single set of LFR parameter values can be misleading. Therefore, we propose a comprehensive benchmarking of community detection algorithms that avoids the shortcomings of the standard LFR benchmarking, called the Unconstrained LFR benchmark.

Finally, we present three of our published works where we apply our Ensemble Louvain on a real-world dynamic social network, gaining insight into the development of Twitter communities. We observe the communities by analyzing the evolution of their influential users, discussion topics, and hate speech use. With this, we show a clear example of how community evolution can be used in applied quantitative research in the interdisciplinary field of complex networks.

This website uses cookies to improve your experience while you navigate through the website. Out of these, the cookies that are categorized as necessary are stored on your browser as they are essential for the working of basic functionalities of the website. We also use third-party cookies that help us analyze and understand how you use this website. These cookies will be stored in your browser only with your consent. You also have the option to opt-out of these cookies. But opting out of some of these cookies may affect your browsing experience.
Necessary Always Enabled
Necessary cookies are absolutely essential for the website to function properly. These cookies ensure basic functionalities and security features of the website, anonymously.
Functional
Functional cookies help to perform certain functionalities like sharing the content of the website on social media platforms, collect feedbacks, and other third-party features.
Performance
Performance cookies are used to understand and analyze the key performance indexes of the website which helps in delivering a better user experience for the visitors.
Analytics
Analytical cookies are used to understand how visitors interact with the website. These cookies help provide information on metrics the number of visitors, bounce rate, traffic source, etc.
Advertisement
Advertisement cookies are used to provide visitors with relevant ads and marketing campaigns. These cookies track visitors across websites and collect information to provide customized ads.
Others
Other uncategorized cookies are those that are being analyzed and have not been classified into a category as yet.
SAVE & ACCEPT
Powered by