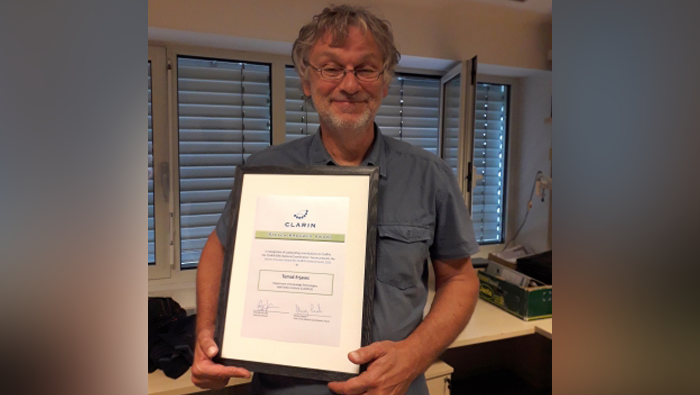 Tomaž Erjavec received the 2021 Steven Krauwer Award of the CLARIN research infrastructure for his work on the compilation of the multilingual ParlaMint corpus of parliamentary debates.

Recently, Tomaž Erjavec participated in the CLARIN.SI-funded ParlaMint Project. This ambitious data engineering task included both creating a multilingual set of uniformly annotated corpora of parliamentary proceedings, as well as processing the corpora linguistically to add syntactic structures of Universal Dependencies and Named Entities annotation. He invented the interoperable annotation format used for the corpus based on Parla-CLARIN recommendations, created validation schemata and conversion scripts, and managed the repository and distribution of the resulting datasets. This unique data collection presents a crucial milestone for research in the digital humanities and political sciences.

Tomaž Erjavec’s contributions to Parla-CLARIN (framework for encoding corpora of parliamentary proceedings) and ParlaMint establish an innovative strategy for handling and processing parliamentary data. Its novelties relate to the proper and unified handling of cross-lingual and across-parliament comparable data, and to making this data uniformly available. The ParlaMint framework developed is becoming a de-facto standard for national parliamentary data and will be further developed to cover more detailed and specific metadata across languages and parliaments.

The visibility of Tomaž Erjavec’s work goes beyond ParlaMint – he is maintaining the certified CLARIN.SI repository, which currently contains more than 200 language resources and tools, or approximately 200 GB data for 80 languages, 65 of which were (co-)authored by Tomaž Erjavec himself. Besides his proficiency in language resources and evaluation, linguistic standards and parliamentary corpora, what makes Tomaž Erjavec a great colleague, according to the jury, is his knowledge and scientific professionalism, commitment, sense of humour and confidence, which makes working with him a real pleasure.

This website uses cookies to improve your experience while you navigate through the website. Out of these, the cookies that are categorized as necessary are stored on your browser as they are essential for the working of basic functionalities of the website. We also use third-party cookies that help us analyze and understand how you use this website. These cookies will be stored in your browser only with your consent. You also have the option to opt-out of these cookies. But opting out of some of these cookies may affect your browsing experience.
Necessary Always Enabled
Necessary cookies are absolutely essential for the website to function properly. These cookies ensure basic functionalities and security features of the website, anonymously.
Functional
Functional cookies help to perform certain functionalities like sharing the content of the website on social media platforms, collect feedbacks, and other third-party features.
Performance
Performance cookies are used to understand and analyze the key performance indexes of the website which helps in delivering a better user experience for the visitors.
Analytics
Analytical cookies are used to understand how visitors interact with the website. These cookies help provide information on metrics the number of visitors, bounce rate, traffic source, etc.
Advertisement
Advertisement cookies are used to provide visitors with relevant ads and marketing campaigns. These cookies track visitors across websites and collect information to provide customized ads.
Others
Other uncategorized cookies are those that are being analyzed and have not been classified into a category as yet.
SAVE & ACCEPT
Powered by